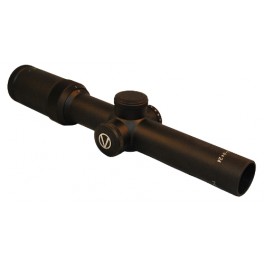 Illuminated Reticle with Side Focus - Made in Japan

Free Same Day Shipping on All US Orders!

We handed off one of our Vixen 1-6x24 rifle scopes to Steve, who put it through its paces more than we ever could. So instead of one of our in-house reviews, here's what he had to say about it:

When you take this scope out of the box, you get the first impression of a fair bit of heft, along with a solid durable feel that says quality. The first thing I noticed is the scope is heavier by a fair amount than listed. This weight 18.5 oz., not the listed 14.5. Wearing the Warne Maxima QD rings that came with it for the review, it weighs 24.5 oz. The scope is identified as the LVF series scope on the box, but is the Vixen series VIII on the Vixen site.

There are four things that catch your eye the first time you look through this scope. The first thing is that the reticle seems pretty fine. The second thing you notice is how good the resolution of this scope is. The third thing that stands out with this scope is the exceedingly fine line of demarcation transitioning from the magnified view seen through the scope to the unmagnified view outside the ocular tube. There is only a fine point sharpie marker type line which is not at all visible. This gives a very apparently wide and easy view with absolutely no sensation of looking through a spare tire, tunnel vision effect. The fourth thing that stands out is the outstanding edge to edge sharpness of the view.

Physically the scope has a 30 mm tube, this one finished in a flat matte. It has an illuminated reticle which is operated by a dial on the left side of the tube. The reticle is of the German #4 variety with a mil dot, fine plex center. The scope is just shy of 11.0 inches in length. The eye relief is a reasonably generous 3.8-3.9 inches. The fov ranges from 124’ at 100 yds. @ 1x, to 20’ at 100 yds. @ 6x. It is set parallax free at 100 yards. It has a second focal plane reticle. The scope is precise in its movements and the clicks have a definite, solid, tactile click when moved. When you shoot the box, the point of aim shifts correctly with the reticle adjustments. This scope came from Vixen Optics Germany and was marked in 7 mm at 100 m increments. The adjustment range is listed as 50 MOA.

I was in the middle of several reloading projects so I did not lack for something to shoot using the scope. To begin with I used it on a Winchester 70 in 243 to shoot ground squirrels. Yeah, I realized that shooting ground squirrels with a 4,000 fps 55 gr Nosler BT is not a typical use for a 1-6x scope. However I had the rifle sans scope and a bunch of ammo and lots of squirrels. So off I went. The fine reticle works fine for ground squirrels and I was pretty impressed at how well I could pick squirrels our of alfalfa just breaking dormancy. While certainly this configuration is not intended for a varmint rig, it did just fine.

I next put it on a Browning A-Bolt in 7 mm Rem Mag. I have had this rifle for a long time and I know it to be accurate with the load of 79.0 grs H 870 and the 154 Hornady Interlock. I have a bunch of the 870 and the Hornady so I was not at much risk of shooting up scarce components. This load leaves the muzzle at 3,125 fps. So if the load scattered over the target, I had a known rifle and load.

After the 7 mag was sighted in I put in on the next reloading project, a 458 Win Mag. This is my nephew’s Father in Law’s rifle, and he wanted some ammo for it. He had supplied the needed ingredients, so the Vixen went on this rifle. It seemed that the 1-6 configuration with the nearly 4 inches of eye relief might have some use on a DG rifle. I figured the 458 might provide enough recoil to test the scope interior workings. I used the Vixen only to fire workup strings over my chronograph. Three strings of five shots each. That is maybe not enough to really prove anything, but the scope survived and the 7 mag was still zeroed each time it went back on the Browning. The eye relief was ample enough there was no issue or even creeping worry that the scope would hit my eye brow when shooting the 458. I can stick my fist in the gap between the ocular and my eye brow.

Since I was at this, I figured I was more or less required to drag out my brothers “Silver Witch”. This is a stainless, synthetic stocked, factory Winchester Model 70 with the push feed action. It is chambered for the 300 Win Mag. What there is about this rifle I’m not sure, but it is the hardest kicking rifle I have ever shot…period. We use a 165 Barnes TTSX with enough 4350 to produce 3,150 fps. It will destroy a new Leupold style mount (the dovetail model with rear windage adjustment) in a dozen shots or less. It is a painful experience to sight this thing in, but since it was destined to be wearing new weaver style mounts and rings, it needed doing. Again, after a 20 round workout, the scope worked fine through the process. I had marked the crosshair position on my bore sighter when I went from the 7 mag, so I used that setting to go back on the 7 mag, and it was a simple three shot affair to get the scope back on target in the Browning. Some of this may well be a testament to the Warne QD rings. The rings made switching scopes pretty easy as all the rifles had long actions, and the ring spacing from the Browning worked fine on the other rifles too.

While there are many things about this scope that speak well for Vixen, I’m not quite sure I understand why they went with this particular configuration. For one thing, it is not going to have a great appeal to low light shooters. A bigger objective is clearly called for there. Having said that, I was surprised at how well I could pick out shot placement at night. We raise registered Black Angus cattle, so I used the bulls in the corral beside the barn as potential targets on several evenings. The scope did pretty well, but I’d like more light to confidently take “shot in the dark”.

It is not quite a true tactical scope either, as a finger adjustable turret setup would be desirable. The turrets are finger adjustable and the clicks are tactile and precise, but you don’t need to be twiddling turrets ¼ moa at a click to make tactical necessity shot changes either.

For my taste, the illuminated reticle needs some work. It is operated by a 10 click stop dial. The reticle comes on at a setting of four, is bright at five, and maybe too bright from there on up to the 10 level setting. The scope is offered with other reticle options.

It suits my needs as a scope for a woods rifle where shots may be close. Also it seems to me to have some application as a DG rifle where the wide field and the long eye relief would seem to have a benefit.

The second plane reticle seemed to have a too fine crosshair at 1-x and was just about right at 4-6x. So I personally would prefer a slightly heavier crosshair than what was used here. But again there are other reticle options.

So what is right with this scope? Quite a bit actually. My personal preferences as noted above are just that, personal preferences. What Vixen has showed me they can do is to build a tough, sturdy, high quality scope. They have showed me they can use good glass and put very high level resolution abilities into a scope. The ability of this 1-6x configuration to discern detail from showing target gridlines, bullet holes, and even seeing out ground squirrels from a natural camouflage background was something that impressed me.

This particular scope, for my personal tastes, would go on the Browning rifle I tested it on. Or perhaps on the 9.3x62 or 35 Whelen I’d like to get. Its use in my world, is as a general purpose elk rifle. Where I hunt the shots can be in timber at woods ranges to an occasional possibility of 300 + yards. So I don’t need a lot of magnification, but I like the wide field available at lower magnifications. I’d likely set this at 4x and use it there.

We are an authorized Vixen Sport Optics dealer, and stock the full catalog of Vixen rifle scopes.