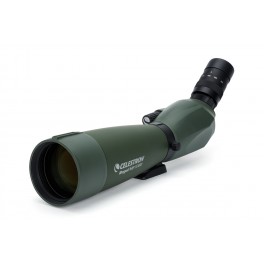 Celestron has a reputation for producing good optics at a good value, so it's no surprise that the Regal M2 spotting scopes continue the trend.  The Celestron Regal M2 80ED is a great fit for sportsmen who hunt in open areas, as well as nature observers and birdwatchers. This model is the replacement for the well-regarded Regal F-ED line.  On paper, it's got a fully waterproof and nitrogen purged body to prevent fogging, and ED glass with proprietary XLT coatings for better light transmission.

First of all, this thing is light for its size.  That's because of the magnesium body - The Regal M2 80ED is 14% lighter than the 80mm model F-ED.  The Regal M2 comes with an assortment of accessories including an aluminum eyepiece cover, carrying case, and a universal T-ring adapter.  Build quality is exemplary.  The eye cup, dual focusing mechanism, and adjustable objective ring all have a quality feel and are very precise.  Tripod threads on the base of the scope mount allow the Celestron Regal M2 80ED to be mounted to any photographic tripod.  A fabric carrying case with strap makes the Celestron Regal M2 80ED very portable.

You can see in the attached photo on this page that we attempted a bit of digiscoping by utilizing the Celestron T-Ring Adapter for Nikon Cameras and a Nikon D60.  We are obviously not photographers, but the process of attaching a camera was very straightforward.  Attach the T-Ring to your camera, unscrew the eye cup on the eyepiece, and your camera now has the full capability of the spotting scope.  With some time to learn the ropes and tweak the setup, it should be no problem getting some great photos of wildlife or sporting events.

The Regal M2 80ED ships with an included 20-60x magnification eyepiece, which is built very well in its own right.  There is no excess play, and the eyepiece and dual focusing mechanisms on the scope work very well together..  The optical quality on the Regal M2 80ED is amazing.  If you've ever used the Regal F-ED, you'd expect nothing less.  With both quick focus and fine focus knobs, acquisition is quick and easy, and the image is simply stunning.  The focusing system was redesigned with this model, making for quicker focusing when using coarse adjustments.