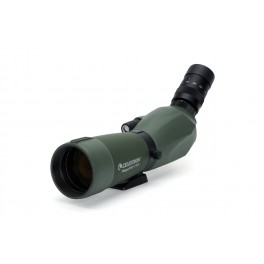 The Celestron Regal M2 65ED has a waterproof, fogproof, nitrogen-purged magnesium alloy body that weighs just under 3 pounds. The Regal 65 ED includes the same aluminum eyepiece cover and objective lens cap as the larger models, as well as the same sliding sunshade. Four built-in tripod screw threads on the base will fit just about any tripod. Considering its size and weight, as well as the included carrying case, this spotting scope is perfect for observation in the field. Stalking game in open terrain often requires a good spotting scope, and being able to comfortably carry this scope while on a tripod is important. While attached to a tripod, the clutch allows the Celestron Regal 65 ED to be rotated in the tripod mount for the most comfortable viewing angle.

The mechanics on the Regal M2 65ED are very good. This spotting scope includes both quick and fine adjustments for focusing, and Celestron has retooled the focusing system from the previous F-ED models for smoother, finer focusing. The included eyepiece in conjunction with the 65mm objective lens provides a range of 16x to 48x. Hunters utilizing this scope in open terrain will find that the highest setting is more than enough mangification to glass big game at long range.

The optics on this scope stand up to scrutiny. The sight picture is excellent, with edge-to-edge sharpness, minimal chromatic aberration, and a very clear image. If you ever used the predecessor to this scope (the Regal F-ED), you know exactly what you're getting here. Celestron's XLT lens coatings provide excellent light transmisison in any light, meaning better resolution and contrast, and a fully multi-coated ED glass objective lens. A near focus of 16.4 feet provides up-close viewing capabilities for birdwatchers and nature observation. With a sturdy alt-azimuth mount, this scope can even be utilized for stargazing, due to the standard 1.25" astronomy eyepiece slot.

We haven't done any digiscoping with the Celestron Regal M2 65ED, but we have done several test runs with the larger models, and the eyepiece and T-adapter function identically. This Celestron spotting scope also includes a T-adapter, so if you have a Canon or Nikon camera, the optional Celestron T-Ring adapter makes it simple to attach a DSLR or film camera. Those wishing to get into digiscoping without a huge investment can utilize the Celestron Universal Digital Camera Adapter to quickly set up and take photos with point and shoot DSLRs. The Celestron Regal M2 65ED is great for sporting events, hunting, nature observation, or amateur astronomy.