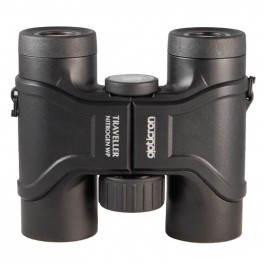 The Opticron Traveller BGA 10x32 is the highest magnification model available in the Opticron BGA Mg binocular lineup.  You can read the review on the 8x32 model to get the full run down, but here's the basics.

The Opticron Traveller BGA is constructed with a super lightweight magnesium alloy body that weighs just over 13 ounces, and it looks more like a compact binocular than a 32mm model.  In fact, before we bothered to look, we assumed they were compacts.  And the first impressions once we saw the magnification specs on the hinge were along the lines of, "What is this thing?"

The first thing you'll notice is the unorthodox design features.  The focus knob is actually on the front of the body hinge.  It's different, and rules out the possibility of a binocular tripod thread, but it does function very smoothly and is fully operable with the ring finger, even during one-handed use.  Eye cups are a push-pull type that are a little stiff, making it slightly more difficult to adjust eye relief than a standard twist-up design.  Obviously this was a design decision rooted in the "make it compact" philosophy, so it's a compromise.  Compared to the 8x32 model, the cups on the Opticron Traveller BGA 10x32 were much harder to extend.  We're sure this changes after some repeated use, but it's worth noting.

There is also a hinge lock on the back of the body hinge (where the magnification adjustment would normally be located) that allows you to lock the bridge at your preferred interpupillary distance.

The right eye diopter adjustment uses the same type of detent system as the eye cups (the whole right side eye cup rotates to adjust the diopter) which can make it difficult to achieve optimum adjustment, but it's probably the most secure system you're going to come across - don't ever expect to accidentally change the adjustment.

Optics on the Opticron Traveller BGA 10x32 live up to the expectations users have at this price point, with some outstanding clarity and sharpness.  Color bias is as true to life as any other binocular we've tested.  Chromatic aberration is pretty well controlled, and is a little more noticable on high-contrast objects.  The best part?  Absolutely no rolling ball or pincushion effect, the field of view is flat and sharp from edge to edge.  The only downside here is the 5.2 degree field of view.  It's perfectly acceptable as far as 10x32 binoculars are concerned, but we prefer the biggest FOV possible (one of the reasons we'll choose a 7x or 8x every time).

We're very happy with the Opticron Traveller BGA binoculars, mostly because they pack a lot of mid-size optical performance into what is, essentially, a compact body.  If you are turned off by large binoculars but still want the performance of a larger model, the Traveller BGA deserves an honest look.