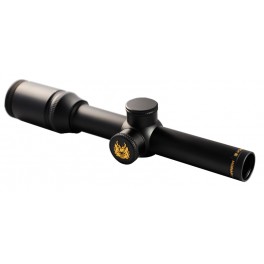 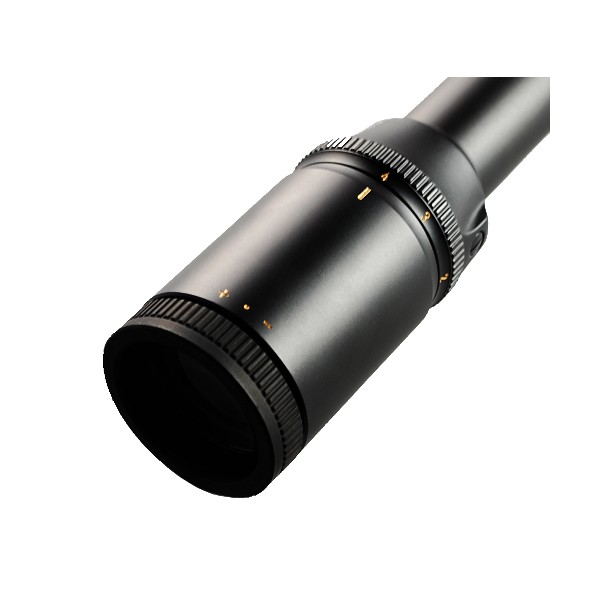 As far as tactical rifle scopes go, the industry standard is usually a 1-4x/1-5x/1-6x scope with a 30mm tube, and a 24mm objective.  Nikon has changed it up a bit with the Nikon Monarch 3 1-4x20, by utilizing a more affordable 1 inch tube design and a smaller 20mm objective lens.  This may seem a little odd at first to the 30mm purists, but we do have to admit that it does factor into a lower profile form factor, which is always good.

The overall package is right in line with the other Nikon Monarch 3 scopes we've reviewed, and while a 1 inch main tube on a tactical scope may not be the norm, it's a nod from Nikon to the popularity of quality one inch scopes.  The Monarch 3 1-4x20 has the characteristic look of the Monarch 3 line, with included flip-up lens covers on both the objective and ocular, and the caps themselves are good quality caps that do the job.  We like the fact that they are included because you'd have a tough time finding a good pair of caps to fit this scope at a decent price.  We did notice that the presence of the cap on the eyepiece prevents adjustment of the quick focus ring, and it has to be removed to adjust.  However, this doesn't seem to cause any problems, because we were able to set the dial to a setting that will keep the reticle in focus anywhere in the magnification range.  So if you do find yourself setting up your rifle with the Nikon Monarch 3 1-4x20, set your focus once, reattach the rear cap, and forget it. 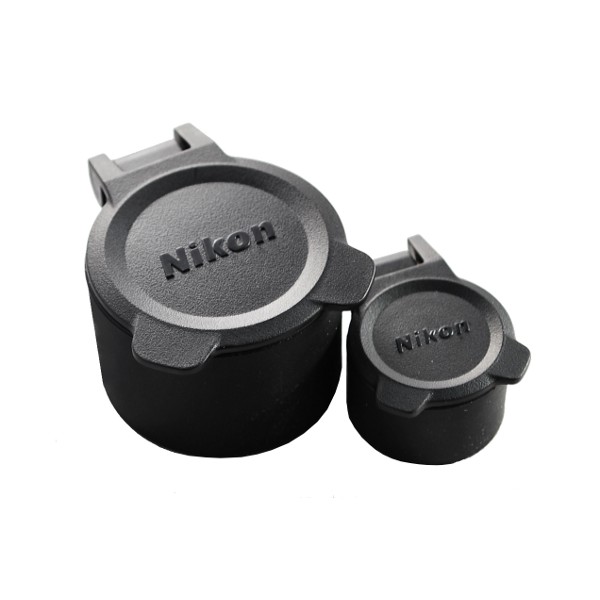 The only whiny gripe we have is that the lens caps are not see-through, which is a nitpicky subjective personal preference.  We've become accustomed to the Leapers caps on our rifles.  But the Nikon caps seem to be a litlte heavier duty (not surprising, the Leapers caps are $8 a set).

Construction quality, like all Monarch 3 scopes, is great.  Quick focus and magnification adjustment exhibit some pretty tight tolerances.  The turret caps thread on beautifully, with no metal shaving.  The one piece body has a light anodizing that should prove durable once mounted.

The internal adjustment on the Nikon Monarch 3 1-4x20 has a 60 MOA range, which is good for a 1 inch scope, and should keep you on target out to the maximum ranges you'll see at 4x magnification.  Rather than the typical 1/4 MOA adjustment found on a lot of scopes, the 1-4x20 has 1/2 MOA clicks.  This may seem like a shortcoming, but realize that at 4x, you won't be reliably targeting as far as you would with something at, say, 9x magnification.  So the long-range precision adjustment of 1/4 MOA is not really necessary, and the 1/2 MOA adjustment utilized in the Monarch 3 1-4x20 is what contributes to the 60 MOA of available adjustment.  The turrets provide great audible and tactile feedback, another characteristic that is pretty consistent across the Monarch 3 rifle scope line.  This scope also includes the reindexing feature that is becoming so common on consumer scopes, which allows you to remove, rezero, and replace the turrets once you're sighted in, effectively "zeroing" your dials. 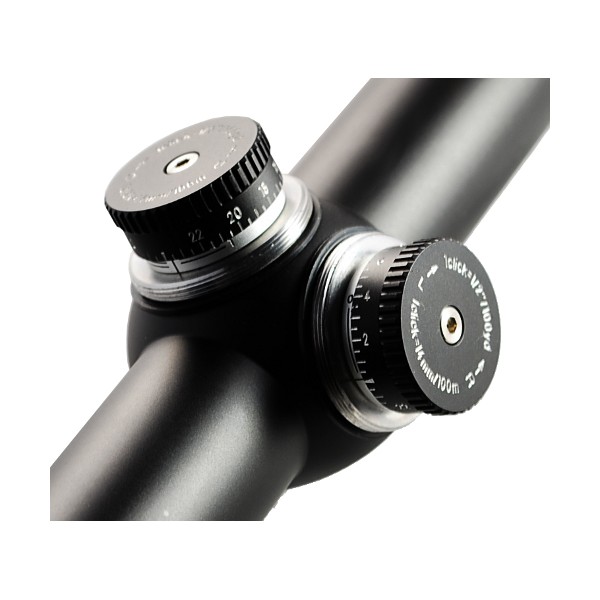 A common concern with 1x rifle scopes is whether or not a given scope is a "true 1x," meaning the lowest setting is actually true-to-life.  So the question arises, "Is the Nikon Monarch 3 1-4x20 a true 1x scopes?"  Well, yes - and no.  We immediately noticed during our testing that the 1x marking on the magnification adjustment ring is actually less than 1x, more like 0.8x or somewhere thereabouts.  We had to go slightly past the 1x setting to achieve the true 1x.  The issue seems to be more pronounced when viewing distant objects at 1x, because closer objects will naturally appear closer to the true 1x that we look for.  This may be caused by the moderate rolling ball (pincushion, beach ball effect, globe effect, etc.).  However, the rolling ball effect does become less and less noticable as the magnification setting is increased.

Optically, the Nikon Monarch 3 1-4x20 performs well otherwise.  We were originally concerned that the inner ridge of the front lens cap would obstruct the view around the edges of the sight picture, but this was not an issue.  Chromatic aberration is nonexistent at 1x as expected, and at 4x we notice only the slightest hint of it.  Clarity is excellent edge to edge, and sharpness is very impressive for the price.

This version of the Nikon Monarch 3 1-4x20 includes the Nikon BDC reticle, which can be utilized with Nikon's SpotOn system to calculate holdover at known distances.  The BDC reticle on other Nikon Monarch 3 rifle scopes has been well received.  On this scope, the first thing we noticed is that the reticle is extremely small.  So small, in fact, that we thought we had a NIkoplex reticle at first glance. Another small issue we noticed is that the field of view for the 1-4x20 is less than what you'll find on a comparable scope, which can be directly attributed to the one inch tube and resulting 20mm objective lens.  This may also be a reason why most of the competition's tactical scopes utilize a 30mm tube and 24mm objective.  Keep in mind that this is the only case where tube size will denote light transmission or field of view, because the objective lens size on a tactical scope such as this is directly correlated with the tube size.

Overall, the verdict here is that the Nikon Monarch 3 1-4x20 is a resepectable tactical scope that would look and function great on either a competition gun or brush hunting gun.  The quality is there, and the price is agreeable to just about everybody.

The Nikon BDC Reticle is designed to compensate for ballistics of your rifle at increasing ranges. Each circle along the vertical post of the Nikon BDC reticle corresponds to a different range. Depending on your caliber, load, and environmental conditions, your point of impact at ranges will vary. Nikon provides some basic guidance for use of the BDC reticle, based on testing performed with standard velocities for non-magnum calibers of 2,800 feet per second, and magnum calibers at 3,000 feet per second. 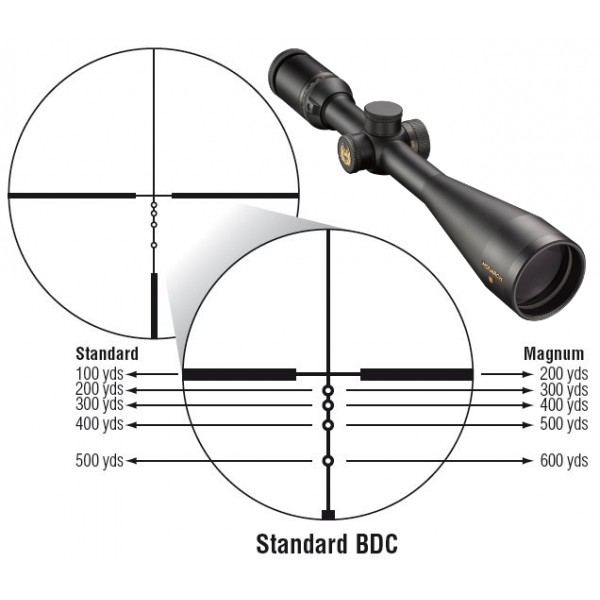 For non-magnum calibers, the center crosshair should be zeroed at one hundred yards. The first circle below the crosshair corresponds to 200 yards, the second to 300 yards, the third to 400 yards, and the fourth to 500 yards.

For magnum calibers, the center crosshair should be zeroed at two hundred yards. The first circle below the crosshair corresponds to 300 yards, the second to 400 yards, the third to 500 yards, and the fourth to 600 yards.

Keep in mind that this is a rough estimate of where you can expect your shot to penetrate the target, but the guidelines should at least get you on paper. You will have to put in some range time to learn exactly how much drop you're experiencing.

Nikon also offers the Spot On program to determine your rifle's capabilities with the Nikon BDC reticle. By going to the Spot On website, you can input your cartridge information for more precise ballistics data.