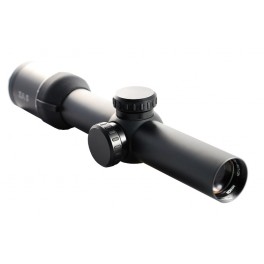 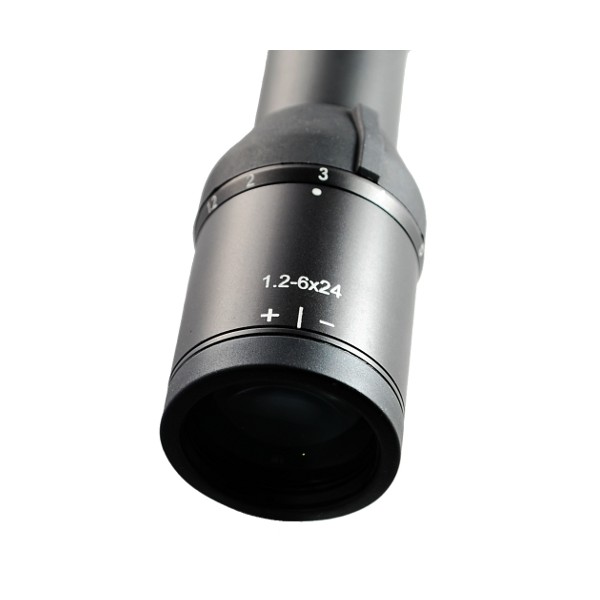 The Minox ZA5 HD 1.2-6x24 is a brand new addition to the Minox ZA scope family for Fall 2013.  Building on the initial success of the ZA5 lineup, the ZA5 HD 1.2-6x24 expands upon the proven design in some key areas that will make this an excellent addition to your rifle, and is a contender for chosen scope for three gun shooters.

The Minox ZA5 HD 1.2-6x24 maintains the impressive build quality and features that the ZA5 was originally known for.  Like all other ZA5 HD scopes, the ZA5 HD 1.2-6x24 features a one piece aluminum body coated in an anodized matte black finish.  The scope is just over 10 inches in length (10.23 inches to be exact) and tips the scale on our test bench at just 12.5 ounces.  This is uncharacteristically light for a low magnification scope, but it's our belief that this isn't an indicator of quality, rather an indicator that Minox has done something right.   On a competition rifle, weight is a huge consideration.  For hunters who may be utilizing this scope on a dangerous game rifle, the lightweight construction will help on an already heavy large caliber rifle. 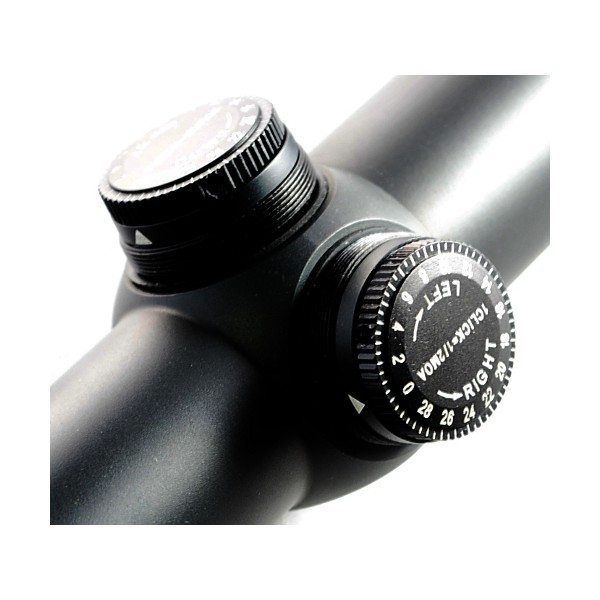 The body is manufactured from one piece anodized aluminum, and maintains waterproofing and fogproofing under even the most threatening weather conditions.  The ZA5 HD 1.2-6x24 overall maintains the same style as the previous generation ZA5 scopes, including rubber knurled turret covers, rubber quick-focus eyepiece, and rubber magnification adjustment ring.  One of the slight changes from the first generation ZA5 is the presence of a 30mm main body tube, which is necessary for a 24mm objective (one inch scopes in this style cannot utilize 24mm objectives because the tube is only a little over 25mm wide).  Aside from having a heftier appearance and a suitably-sized objective, this also means that the Minox ZA5 HD 1.2-6x24 has more internal windage and elevation adjustment, maxing out at 90 MOA on each, in 1/2 MOA increments.  This poses the question, "Why not 1/4 MOA?"  The answer is simple - at the ranges you'll reliably shooting at maximum magnification, 1/4 MOA won't make much difference.

While we're on the topic, the turrets on the ZA5 HD 1.2-6x24 have been revamped from the previous generation ZA5.  They are a much lower profile, bearing a lot of resemblance to the ZV3 turrets.  The feedback from the turrets is actually way better than anything with this turret style we've seen, with very affirmative audible and tactile feedback.

The 1.2-6x24 is designed to be utilized on close range rifles, likely to be used for hunting in areas of heavy cover without long sight lines.  In that respect, the 6x magnification is more than enough, and should get you out to about 500 yards, maybe more, for situations where the need would arise.

So where does the ZA5 HD 1.2-6x24 fall in comparison to other similar scopes?  Well, let's compare to the Vixen 1-6x24, which is 2.5x more expensive, but probably the most directly comparable scope we have on hand.  The Vixen does have the advantage of 1/4 MOA, but we do question how much of an advantage that really is for the distances and situations where these scopes are likely to be used.  Eye relief is similar, with the ZA5 HD 1.2-6x24 possessing a full 4 inches of eye relief, whereas the Vixen is close with 3.9 inches.

In addition, the field of view on the ZA5 HD 1.2-6x24 is only 81.2 feet at 1.2x, which is far below the Vixen's 124 feet.  As a percentage, it has only 65% of the usable field of view, but also consider that this measurement is at 1.2x, which is a 20% decrease in FOV from the start.  So we could say it's thinner, but understandably so.  Competition shooters looking for a true 1x power will have to look elsewhere, but 1.2x is still quite usable and versatile for a hunting rig.  In fact, if you ignore proper eye relief recommendations and can maintain a good cheek weld, it's possible to get the Minox ZA5 HD 1.2-6x24 to a "false" 1x magnification, which can be reliably utilized in competition or hunting situations.

The Minox ZA5 HD 1.2-6x24 utilizes high definition Schott glass, a step above what was originally found in the ZA5 line.  The HD aspect is a sure improvement in clarity, light transmission, contrast, and sharpness over the previous generation, and produces images that are on par with scopes twice the price.  First of all, clarity and sharpness remains very good throughout the entire magnification range, and edge to edge clarity is very, very good, with no noticable fuzziness towards the end of the sight picture.  On lower magnification, chromatic aberration is a non-issue.  On higher magnification, there is a little CA, but not more thanwe expected, and we consider it very well controlled for the magnification ratio present in this scope, especially when compared to similarly priced models. Eye relief is a full four inches, and at that point there is little to no "pincushion" effect (rolling ball), which should make everybody happy.

The Minox ZA5 HD 1.2-6x24 includes instruction manual, allen key, and neoprene Scopecoat.  Combine that with the lifetime Minox warranty, and we think you have a winner.