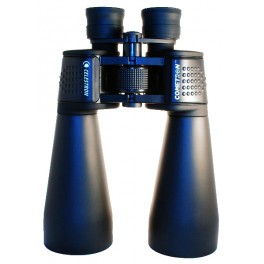 The Celestron Cometron 12x70 binocular came to being late in 2013, in anticipation of Comet ISON's first observed trip around the sun. Unfortunately, on Thanksgiving day in 2013, ISON pulled an Icarus and flew too close to the sun, and disappointed the world's amateur astronomers.  But no worries, the Cometron is still a capable astronomy binocular with a lot to offer.

For one, the Cometron 12x70 offers a slightly less powerful magnification than the SkyMaster 15x70.  But isn't more magnification better?  Not necessarily.  A lower magnification makes the field of view slightly wider, which can make it easier to locate celestial objects.   In addition, a 12x magnification is more than powerful enough to spot plenty of interesting sights in the night sky, and is the higher end of magnification for a handheld binocular.

But there is one more important factor that may, in fact, make the Cometron a better performer in certain conditions.  As magnification increases, the amount of light transmitted through the lenses to the viewer's eye is decreased.  If you've ever utilized a spotting scope with adjustable magnification, you'll see this effect in action as you turn up the power.  So, in theory, the 12x70 should transmit more of the available light.  This can provide a huge advantage in terrestrial viewing situations, such as tracking game.

The construction of the Cometron 12x70 is identical to the SkyMaster, with a fully armored body, multi-coated lenses, and fold down eye cups. We have seen a lot of substandard armor on binoculars under $100, but the quality of the rubber armor found on the Cometron 12x70 is much more robust and high quality.

There is also an included rainguard, as well as a high quality carrying bag - also indentical to the bag included with the SkyMaster.  The included tripod adapter is pretty good quality, molded from hard plastic.  We have tested the Cometron 12x70 extensively in-house and found the adapter to function just as well as our standalone Celestron Binocular Tripod.

The optical performance of the Cometron 12x70 is, in few words, quite impressive for a binocular under $100.  We scoped a hill several hundred yards away during the day and were able to pick out intricate details.  Considering its SkyMaster lineage, we were really expecting nothing less.  Clarity and sharpness are very good, chromatic aberration is well controlled, and color is outstanding, again, for the price.

We are perfectly comfortable recommending the Cometron 12x70 for stargazers as well as hunters.  With the included tripod adapter, relatively light weight compared to a spotting scope, and included carrying case, this coudl easily take the place of a spotter in situations where you're hiking miles over terrain and tracking game at long ranges.