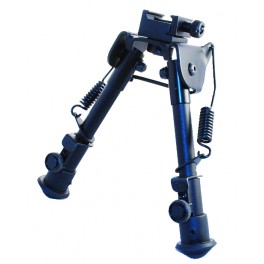 The UTG Tactical OP-1 Rifle Bipod is a sturdy rifle bipod that is a valuable accessory for the target shooter, and a great accessory for the range bag.  This rifle bipod will readily mount to any bottom Picatinny/Weaver rail on tactical rifles, and also includes a swivel stud adapter for mounting on hunting rifles. The legs on this bipod are constructed from lightweight aluminum, while the top portion is solid steel.  A matte black finish covers this bipod from top to bottom, and gives a slick look to the aluminum and steel construction.  The bottom of the bipod legs are capped with rubber feet for sturdy contact with a shooting bench.

In the open position, the OP-1 Rifle Bipod measues 50 degress of angle between the legs.  This bipod ranges in height from 6.1 inches (fully retracted) to 7.9 inches (fully extended).

Mechanically, the Tactical OP-1 Rifle Bipod functions like a lot of other higher priced options.  The center nut on this bipod can be tightened to keep the bipod fixed, or adjusted to allow for panning.  The legs are spring loaded, and stay secure and tight in both folded and extended positions.  Each leg on this rifle bipod extends from the lowest to highest positions by 1.8 inches, and is kept in place in the fully extended position by a spring-loaded clutch that engages automatically.  Pushing the button on this clutch will cause the legs to snap back to the fully retracted length. For positions in between, there is also a set screw on each leg that rotates to lock that leg in place.  The bipod attaches either directly to a Picatinny/Weaver rail, or to the included swivel stud adapter, and is held in place by a knurled thumb screw.