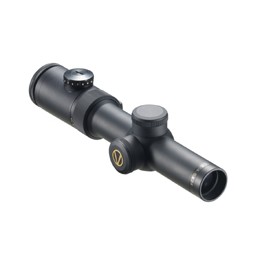 We heard a lot about Vixen from their astronomy products, and actually had no idea that they were a sport optics manufacturer until recently.  Much to our surprise, they have been making sport optics for over a decade!  Their binoculars and spotting scopes are already well known in birding circles, so we thought it was only fair to give their rifle scopes a go.

And boy are we glad we did.

The Vixen 1-4x24 rifle scope is 100% manufactured in Japan.  If you're familiar with Japanese built optics, you already know that they're nipping at the heels of the European manufacturers, and produce some extremely high quality optics at a fraction of the price of German, Czech, and Austrian brands.

The Vixen 1-4x24 has a 30mm main tube, and features a plex reticle with illuminated center dot.  Build quality on this scope is fantastic.  Every single moving part exhibits tolerances and feel reminiscent of German optics.  This is not surprising, as the Vixen 1-4x24 is quite popular in the European market.  Focus and magnification rings just feel perfect, with no spots of resistance and excellent precision.

The turrents on the Vixen 1-4x24 features the same reindexing feature as many other scopes we've reviewed, but this particular scope utilizes a tool-less design that allows you to reindex windage and elevation to zero by pulling on the turret, resetting to zero, then pushing the turret back in to lock.  It's pretty cool and means you have to carry one less tool when at the range.  The windage and elevation adjustments are tight and precise, and produce a satisfying audible click as they fall into place.  The markings are very precise, and the hash marks line up perfectly even after a full revolution of each turret.

There is quite a bit to be said about the optical quality of the Vixen 1-4x24.  Immediately after removing this scope from the box, we did a double take - the optics are really that good.  We'd expect something of this quality to carry a price tag roughly double of its current price.  The clarity, again, rivals that of Swarovski and higher model Zeiss.  The lowest magnification is a true 1x, and exhibits absolutely no visible chromatic aberration or rolling ball, and sharpness continues right to the edge of the sight picture.  On the maximum 4x magnification, the picture is just as clear and chromatic aberration is, again, nowhere to be found.  Clarity is maintained across the entire magnifiation range.  You will be impressed by the optics in this scope.

The illuminated reticle on the Vixen 1-4x24 is a plex with an illuminated center dot.  The brightness settings go from 1 to 11, however they are not actually 11 seperate settings.  Rather, there are 11 markings and the illumination brightness constantly increases as the knob is turned to its maximum setting.  The lowest illumination setting is just barely visible in low light, and the highest setting is easily visible on a bright day.  Battery life is unconfirmed, but we expect that it's in line with other scopes at this price.

All told, the Vixen 1-4x24 rifle scope is a huge value, and we're sure you're going to hear a lot about these scopes in the future.

We are an authorized Vixen Sport Optics dealer, and stock the full catalog of Vixen rifle scopes.